We are very proud to announce that Daniel won ‘Apprentice of the Year’ at the Eastern Region Training Group back in February. 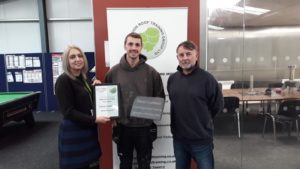 He’s got himself a diploma!

Daniel, from Newport Pagnell, is a valuable member of the team here at Bailey Roofing. Bailey Roofing supports their local community and employs people who live in and around where they are based. Daniel, 24 at the time, started an apprenticeship with Bailey Roofing where he was trained on the job and attended college on day release. After two years Daniel became a trained and qualified slate and tile roofer gaining an NVQ/SVQ Diploma.

Daniel is interested in all aspects of roofing, he’s a quick learner and very competent. Never afraid to seek advice and learn new skill sets from the rest of the team. When asked about his apprenticeship Daniel explained that he’s had great guidance from Bailey, specifically from Matt Quinn. Whilst the job is fast-paced, time was always made for Daniel to learn.

Future thinking, Daniel’s goal is to become a project/contracts manager and of course he would like that role to be with Bailey. A company where he has built his foundations and confidence with support from the team.

Being organised is key…

Now, fully qualified, a typical day in the life of Daniel, like most of the Bailey team is very busy. He is efficient at organising his own work on sites and working with the rest of the roofers. Ensuring at the end of the day things are prepared for the next – materials, scaffold adaptions etc..

Another success story for Bailey…

It’s another success story for Bailey MK who offer complementary services – loft conversions and stoves. Not only that they have a few surprises up their sleeves and all will be revealed soon!

Could you be the next apprentice of the year?

Are you driven, committed, focussed and hard-working?

Contact us if you’re looking for a career in the roofing industry with a company dedicated to training and improving.

About the qualification and experience…

The course is designed for learners aged between 18-24 that want to pursue a career in slate & tile roofing. This course covers a two year period, candidates will attend day release off the job training at the roofing college/roof training centre once a week. The remainder of the time is spent with the employer on-site, gaining the experience necessary for the assessment on the NVQ/SVQ Diploma which is carried by an assessor from the training centre.