Matthew Quinn is a Contracts Manager here at Bailey MK who recently received his certificate for an NVQ Level 3 in Occupational Work Supervision. 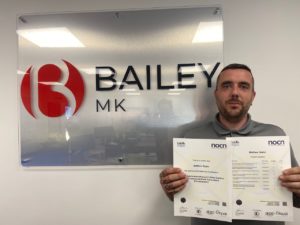 Great job Matt! Give us a smile:)

Matthew is from Houghton Regis with over a decade of experience in the roofing industry, he’s a very busy and highly valued member of the team. Not only for the role he plays within the company but he’s also known for the great support and guidance that he gives others around him.

Matt, as he’s known to us, started as a labourer for a local roofing company. Through hard work and focus, he progressed within the company building his skillsets in flat roofing, tiling and leadwork. Loyal and dedicated he stayed with the company for an impressive 15 years. This built a strong foundation for his future goals and after working a few years with another roofing company he began his journey with Bailey MK where he has been for the last 3 years.

Initially, Matt was working on a self-employed basis for Bailey MK but after a successful year, he was offered a full-time employed position with the company. This allowed him to progress further through the company by completing his NVQ Level 2 in roofing and construction.

He didn’t stop there, he kept studying whilst working full-time and made the transition to Contracts Manager and achieved his NVQ Level 3. This allowed him to obtain his gold supervisors CSCS card.

The NVQ Level 3 involved a lot of work on the management side of the job and had a strong focus on health and safety.

What’s next for Matt?

Matt wants to keep climbing the ladder within Bailey MK and complete his NVQ Level 6 which will allow him to obtain his black CSCS card. We have every faith in him achieving his goal and look forward to seeing him on that journey.

What’s Matt’s advice to those who want to progress through the roofing and construction industry?

Find a company to work for who are prepared to invest time into helping you build your skillsets and achieve your goals. Ask the company if there are further opportunities for training and progression so you know your commitment and effort will be supported and pay off.

Bailey Roofing get gold status from the NFRC